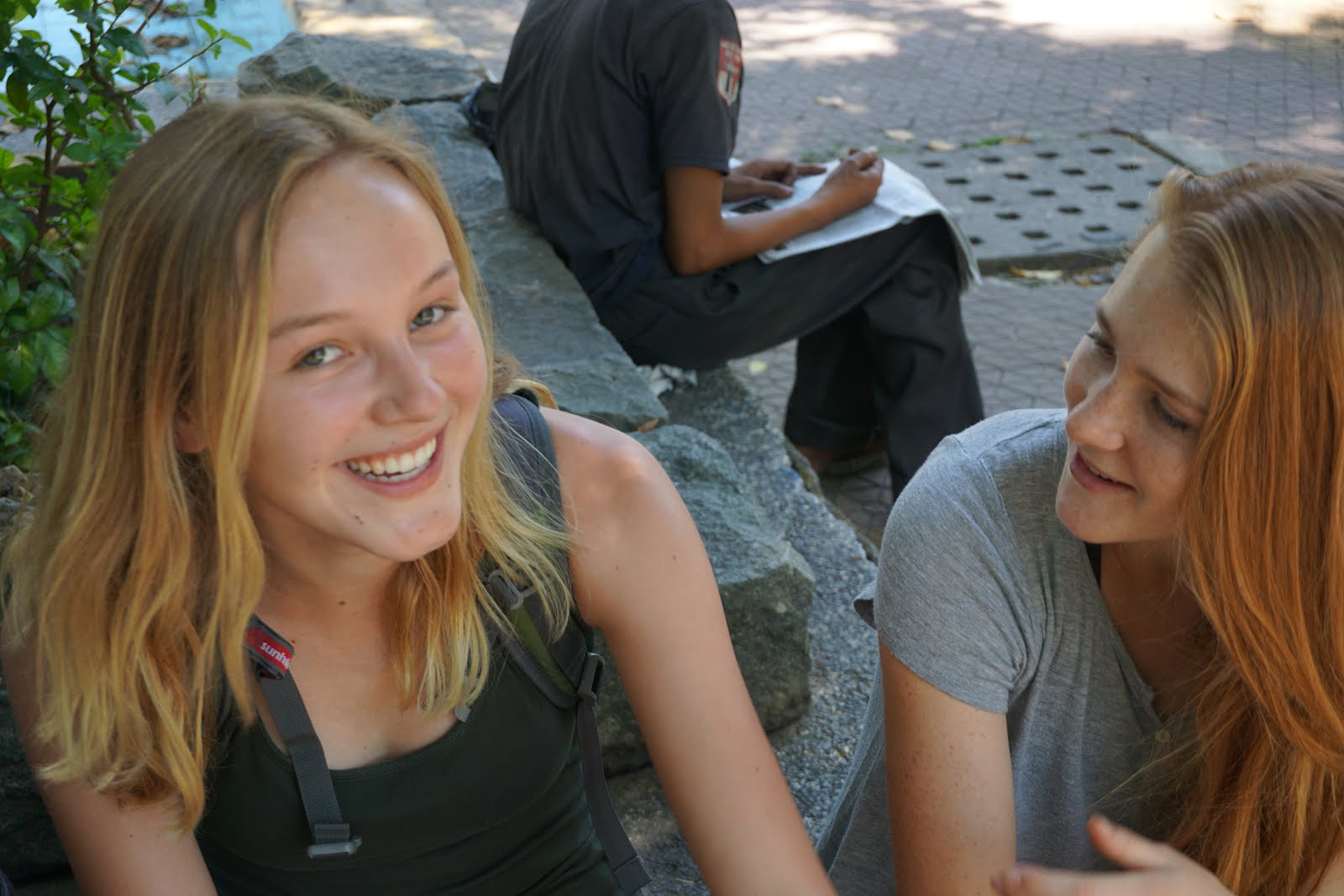 We started off the day with a Vietnamese wake up call… a loud festival right outside our hotel, with techno music blaring at 5:45 AM. Knowing they wouldn’t fall back asleep, Milo, Lamont, and David watched the festival through their window for another hour. After, we had a buffet breakfast upstairs, which was pretty good with the exception of the slightly funky milk. We met downstairs to head off to the War Remnants Museum, a grim reminder of the atrocities of the Vietnam War and the role that the U.S. played in it. In a beautiful juxtaposition, as we entered the museum and began our self-guided tour, our group was approached by Vietnamese person after person, most of them young-looking, who wanted to take selfies with us and introduce themselves in English. It is interesting that as we were learning about how our country was responsible for devastating Vietnam, the Vietnamese of only one or two generations later are eager to make our acquaintance. After the museum tour however, the mood of the group was heavy. We went to a local park nearby to relax and reflect on what we learned at the museum, which was really nice. After about an hour of walking around the park and talking to locals, dancing, playing catch with little kids and even doing some Tai Chi, we got back on the bus to head to lunch. Lunch was at the same buffet of our hotel as breakfast, and the options were wide, ranging from normal noodles, spring rolls, etc. to boiled duck fetus. Kai tried the boiled duck fetus, and according to his post-fetus interrogation “It wasn’t even thaaaat bad.” After lunch, we got a tour of the Reunification palace, and learned more about Vietnam before the war, as well as the legacy of Ho Chi Minh. Following the palace tour, we went to Chinatown.  This tour (by our same guide Hao, who is a totally cool guy) consisted of a walk through the local meat market, as well as the Chinese center of worship. We placed burning incense in the bowl of ash to represent a respect for the dead with an odd number of incense sticks, and a respect for the living with an even number, as is according to Chinese tradition. Some time to chill at the hotel, which the girls used to play bananagrams and (some of) the boys used to swim in the hotel pool. Then, we had dinner and prepared for a night exploring. Maddie, Lamont, and Jordan chose to wait at the hotel and relax, and Kai, David, Melissa and Milo went out to check out the scene within the blocks surrounding the hotel. We discovered a stray cat, some slightly overpriced pistachio ice cream, and a little bit of live music. Now, we’re all exhausted, but today was a great day.
-Milo and Melissa 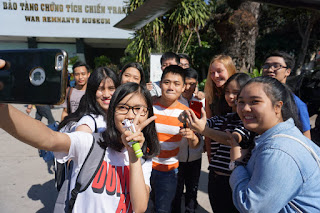 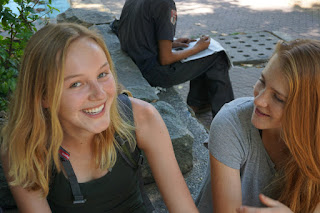 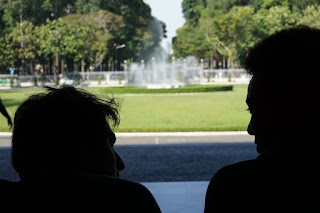 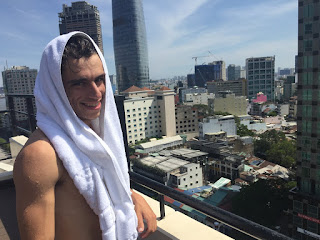 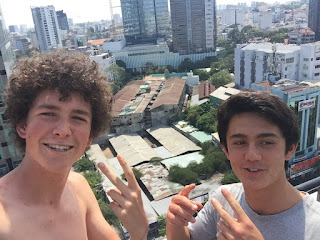 Todays activities began with an irksome wake up call early in the morning. Breakfast was much more peaceful than days prior, with significantly less traffic in the buffet line. After meeting in the lobby, we proceeded to the Emperor Jade Temple where Kai found enlightenment by getting lost looking for the bathroom. The pungent incense added to the relaxing atmosphere as we wandered through the various rooms of the temple. Hao told us about the different districts of Ho Chi Minh as we travelled by bus to the fourth district. We walked on the sidewalks beside the Mekong River, observing the different arrays of fruits for sale. We stopped for quick, refreshing beverages at a very lush cafe called Cafe Soi Da. The drinks were extravagant with many different colors and flavors. Next we went to lunch at Bill Clinton’s favorite Pho restaurant in Vietnam, Pho 2000. Out of all of the Vietnamese food we’ve had so far, we unanimously voted it to be the best. Then we went to the market to exercise our bartering skills and shop “like a local”. Despite having three hours to shop and explore, Milo logically decided in the last 20 minutes before we had to leave, to get a cheap haircut in a salon with a view of an adventuring chicken outside the door. This delay caused general panic and aggravations, even with the bus driver who was otherwise extremely tolerant. We ended up leaving Milo, forcing him to shamefully walk home with Hao while the rest of the gang all enjoyed our air-conditioned hotel rooms. At six, we walked across the square to to have dinner at really fancy restaurant, where there was succession of rice, noodles, vegetables, and spring rolls. Lastly, we prepared for the  looming fate of migrating to the Mekong Delta homestay, or as Hao put it jokingly, “The Reeducation Camp”. 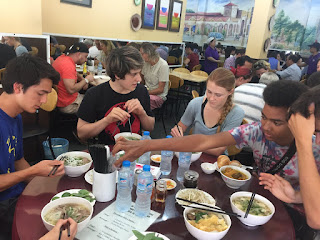 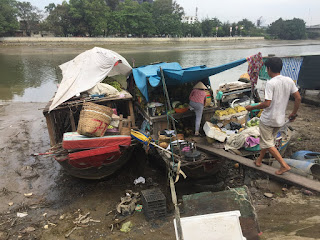 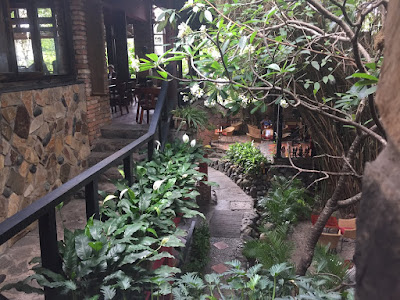 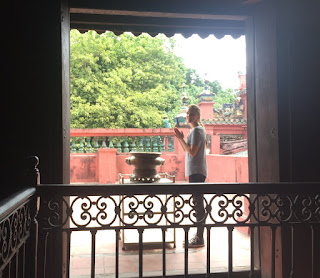 We started off the day having breakfast at the hotel buffet, then, we packed our bags and got in the bus for a few hours. When we got off the bus at Can Tho College, we met many friendly Vietnamese english students, including our Pen Pals who we’ve been talking to via email for around a month. We then sat down amongst the students and started playing ice breaker games, including a game where we hold on to each other in a line, squatting, and race against another team. Then, we took a break and had some snacks while all the students were eager to take selfies with us and get our social media info. When we went outside, we partook in this traditional dance:
After, we went with some of the students to karaoke! In the beginning it was kind of awkward, as everyone was nervous to sing. But soon enough everyone was comfortable, and we had a blast. The coolest part was seeing seemingly shy people come out and get into the groove. Truong was Milo and Kai’s pen pal, and he seemed hesitant to step up to the mic, but after an entire room of people yelling at him to sing, he belted out his vocals over “My Heart Will Go On”. Someone even recreated the Titanic scene. The best part of today was being able to really see Vietnamese people be themselves amongst us. Throughout the trip people have either been overly kind, neutral, or determined on going to their destination or finishing their goal. But in karaoke, we were singing, laughing, and overall jiving together. It was also interesting getting a more intimate look into Vietnamese culture. When I went in to hug some of the boys, it seemed like they were uncomfortable or didn’t expect a hug from a guy. But on the other hand, there was a lot more intimate touching later on once we got to know each other. The end of the karaoke experience marked the beginning and end to an era of the trip. For the first 3 days of the trip we were in the big urban city of Saigon. That ended today, and thrusted forth an era of a more intimate look into Vietnamese culture, with less crowded roads, emptier markets, and tighter knit towns. I feel like this stage of the trip will be a really eye-opening experience, and look forward to it with a open heart and open mind. After another bus ride, we got onto a boat and headed to our home-stay. The rural and forest-like atmosphere contrasted with the urban city-life of Saigon. Overall, today was the most memorable day of the trip thus far, and our interaction with the students will be one of our most treasured travel memories for years to come.
– Jordan and Lamont 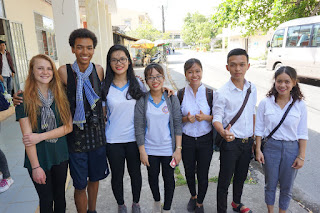 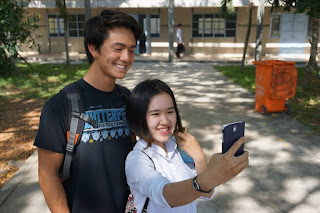 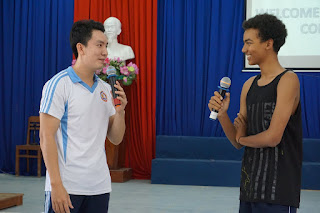 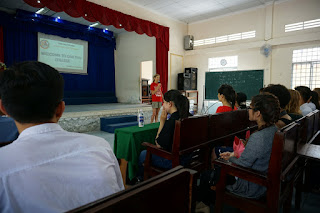 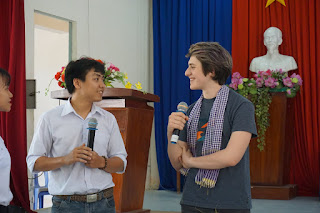 This mornings breakfast included eggs, breads with assorted jams, coffee or tea and fruits. The first activity began sweetly at a candy factory. At the factory the artisans made colorful exotic candies like coconut caramel and flavored rice cakes which were all delicious. Next we had an competitive market experience where we were split up and had to buy various items for dinner without knowing what they were called in Vietnamese. This excursion finished with lunch at another restaurant. Next, we toured the local canals in small narrow boats and saw wildlife. After getting back to the home stay we grabbed bikes to make our way back to the home stay later. Meeting the Viet Cong officer was the most interesting part the day. He spoke of his time spent in the war; the how,why, and when the war began from his perspective. His stories showed sadness, peace and reconciliation in his character. Next we found and walked across a sketchy bridge made from small pieces of wood and held together with flimsy nails, known as a mushroom bridge. The bike ride home was uneventful but peaceful and relaxing. The day concluded with us making our own dinner with the ingredients from the market and a restful night.
– Kai

Click below for a video summary of today, shot and edited by yours truly.

Our day started off with a morning walk through the beautiful gardens of the homestay where we saw numerous domesticated birds as well as wild plants and animals. We arrived back home around breakfast time where we enjoyed mangos, bread, and eggs served with Vietnamese coffee and green tea. We then boarded our boat full of bikes from our previous rides and greeted Hao and our temporary biking guide for the day, who introduced himself as Mr. Henry. Mr. Henry led us to a charming rice patty field, where we learned about the origin of the village’s lettuce and coriander supply, and later enjoyed jasmine tea in the shade. During our tea time, we laughed with Mr. Henry about various random topics. We biked back to the boat where we had our “near death experience”. The tide was low, and our boat was running out of gas. As the captain was away from the steering wheel refueling the engine, our boat drifted towards the columns of the bridge where the side of the boat took a blow, aggressively crashing into a tin sign. It was fun. Our boat carried on, and we stopped off at a local brick factory with huge rooms filled with clay and porcelain pots. We biked out of the factory, through a bustling town, and onto a ferry that took us across the Mekong Delta with our bicycles. We biked the rest of the distance to our homestay and took a two hour long break. Then, we delved into a very muddy, man made canal which to our surprise was filled with many catfish and elephant ear fish. We struggled in the mud for an hour spastically hand fishing, and followed it up with a mud throwing war. When we were finished fishing, we rinsed off in the Mekong Delta and showered. After we rested, we walked over to the neighboring homestay and listened to live traditional music and learned about the Vietnamese instruments. We ate our catch of the day with some rice and shrimp. With our bellies filled, Hao brought us over to an open area, where we played games involving balloons, corns starch, garlic, sticks, blindfolds, and clay pots. Wheeeeeee Whaaaaaa yeeeee whoooooo haaaaa
-Maddie and Melissa 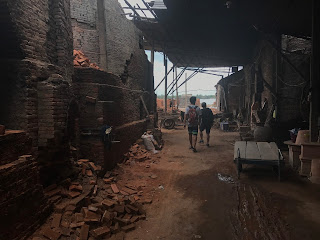 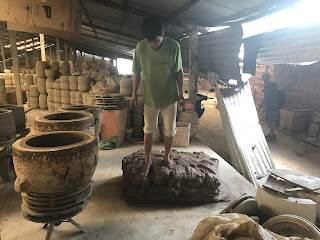 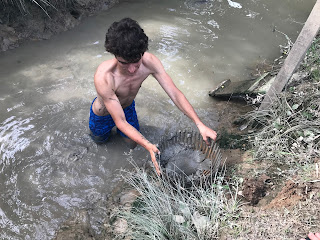 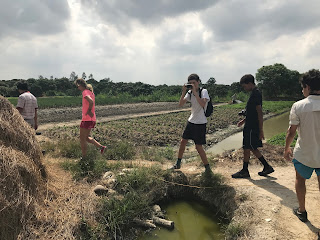 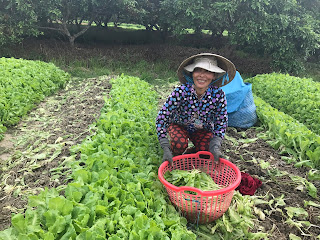 we did a video blog this time! Hope you enjoyed!
-lamont and david