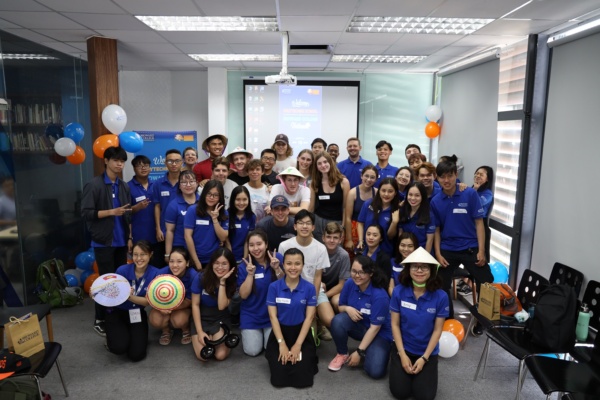 Monday with our Broward College friends

We had a much earlier start today, departing the hotel at 8:30. Our group then took the bus to Broward College to finally meet our Vietnamese pen-pals. I was surprised at how vertical the building was in contrast with the universities in the states. Everyone introduced themselves and we got straight into team building activities. The students all spoke English very well, and were easy to understand for the most part. The larger group split up into 6 sub-groups, each containing a mix of Vietnamese and Poly students. Next we came up with names for each group, and announced them to the whole possession (teachers and students.) Some interesting group names surfaced; Bread o’ Five, Team Vixen, Team Marts (named after Martin,) Team Michael (Jack was given a nametag with Michael on it and was immediately targeted,) just to name a few. Afterwards, we began with a game similar to Telephone, but instead of whispering into each others ears we drew pictures on whiteboards. The first person was given a word to draw in 10 seconds, after the time was up, they turned around and showed the picture to their next teammate, and so on until the last person who did not have a whiteboard, and had to guess what the word was based on the picture.

We then learned a traditional Vietnamese song about a duck that flies and eats something.  Watching the performances from each group was very entertaining. After that we all sat down and painted on traditional Rice Hats with our pen pals, some paintings included pictures of things people liked so far, Vietnamese flags, and a Vietnamese themed Captain America shield.

After we painted the hats we went to lunch with our new friends.  We went to an establishment with a vast selection of traditional Vietnamese food.  I found the lunch to be delicious. After lunch we went to Karaoke with our pen pals.  The highest scoring song was “Shallow” sung by Colin, Jack, and Wiley, they received a 96 out of 100.  The Vietnamese students were all much more talented than us on the mic, but somehow received lower scores.

After over 2 hours of singing, we dropped the Broward students off and went to the Pagoda (Vietnamese Temple).  It was very interesting to learn about the different religions that were present in the Pagoda such as: Buddhists, Daoists, and Confucists.There were also a lot of stray cats at the Pagoda, along with other animals such as turtles and koi fish.

After that we came back to the hotel for a long rest before dinner. Our day concluded at an upscale Vietnamese Restaurant about 20 minutes away from our hotel where we had a bevy of interesting foodstuff.  After our meal we went back to the hotel and turned in for the night.

Music Saved My Life
The transcendent power of music heals both individual – and national – trauma. Packed with rich historical and contemporary footage…