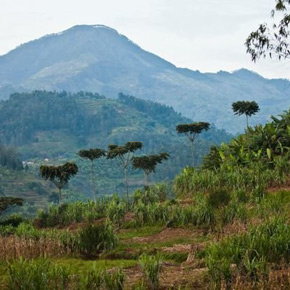 A Reason to Smile

Today marks the 21st anniversary of the start of the Rwandan genocide.

Joy Watson travelled with Network for Africa founder Rebecca Tinsley and others to Rwanda in March. Today, on the 21st anniversary of the start of the genocide, we share her impressions of Rwanda.

“The land of a thousand hills and a million smiles” declares the large billboard that greets new arrivals at Kigali airport in the beautiful country of Rwanda. This marked my second visit to Africa, my first to Rwanda, but was this bold declaration true? I was intrigued to discover what this small, land-locked nation was truly like, not least because it is the same size as my native Wales, which also boasts a large number of hills. But that’s where the similarities seem to end. Wales is surrounded on three sides by the sea, has a population a third of the size of Rwanda and despite political and social injustices laced through its history, did not experience a million deaths in three months, just two decades ago.

As our trip unfolded, it became clear it was going to be one of striking contrasts. We went from visiting amazing life-giving projects funded by Network for Africa, where women and children were given dignity, knowledge, skills for life and productivity, to viewing memorial sites where the clothes of those murdered were draped over pews that had not been used for worship for almost 21 years. The pervasive stench of trauma, desolation and death still hung rank in the air.

As a counsellor, I am used to confronting the effects of loss, pain, abuse and trauma, but what I was seeing and sensing was on a whole different level to that which I had ever seen and sensed before. Here was a country that appeared to have had its very heart ripped out in the seemingly senseless decimation of so many innocent lives. Is it ever possible to smile again after something like that? Apparently so. Admittedly the smiles were slow, reticent, wary, but nonetheless genuine. These remarkable people reached out and responded to kindness, empathy and warmth. They opened up to us in ways hard to comprehend given their experiences. They shared their stories and their lives and the little they have so generously, whilst exhibiting such extraordinary resilience and tenacity.

There’s another tag line bandied around in this enigmatic country: “Rwanda, the heart of Africa.” Whilst I suspect this is a reference to its geographical location, I found myself wondering ‘what if’. What if this stunning, lush, ‘full of potential’ nation were to become the ‘heart’ of Africa? A place of life and energy where the life-blood is pumped carefully, lovingly, equitably to every part; where compassion, empathy and kindness pulse and spill out into all communities and surrounding countries. A place of passion, creativity, colour and restoration, where differences are celebrated and all life is valuable. Now that would be something to smile about.