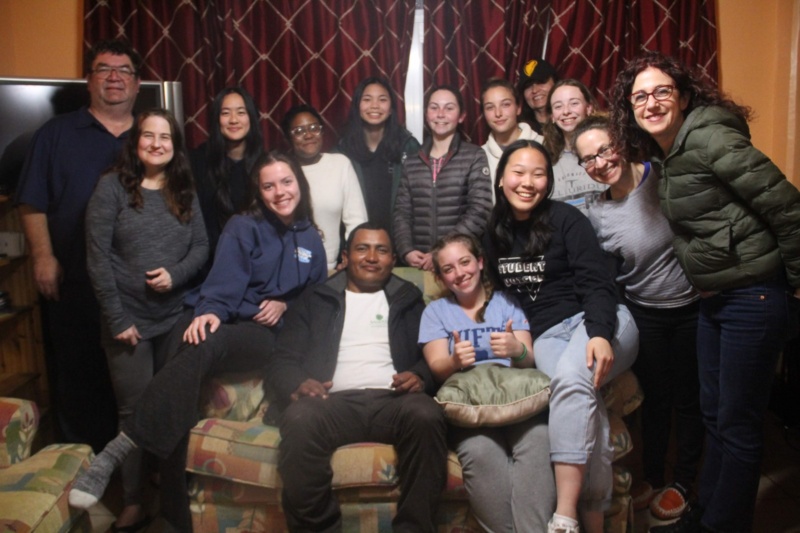 A Reflection on Educational Privilege

A Reflection on Educational Privilege

I have attended private schools my entire life; from the second I stepped on campus to Mayfield Junior School as a kindergartener to now a Junior at Westridge, the worry of not have a school to attend has never crossed my mind. I wish I could say I understood the immense privilege of receiving a private education when I was as an eighth grader or even just last year, but until very recently, access to education was always an afterthought. Although I still cannot certainly declare I have a full understanding of the topic, the honest conversations I have shared with people this year with completely different life and educational experiences than my own, remind me to watch my privilege.

Waking up on the last morning of my Tijuana/US border trip, I thought my brain was filled to the brim with the issues dealing with immigration. We had spent the previous four days learning about border relations from numerous points of view including a border patrol agent, a Kansas couple, deported veterans, a Honduras caravan survivor, and several mothers and their children waiting for their asylum applications to be read. That day our host family signed us up to serve at a local soup kitchen.

When we arrived, everyone was assigned jobs ranging from dish duty to setting up tables for each incoming round of people. I was dealt with mopping the floors near the entrance as people dripped soap and water between the hand washing stations. The guy in charge of allotting soap stood beside me and after a few minutes we began talking. Our conversation was completely in Spanish, as he embarrassedly informed me he only knew how to count to 1000 in English. In broken Spanish, I began asking him questions about himself. This cycle of response and question traded off between the two of us until we had somewhat of a grasp on each other’s lives. He explained that he was 22 and had just arrived in Tijuana five days prior with his cousin. Originally from El Salvador, he made the difficult decision to leave his three siblings and travel to the border. He was sick of the conditions in El Salvador as he explained the mass corruption and gang violence. He also described working for a Coca Cola factory earning a wage of less than the equivalent of 5 dollars a day. His restlessness was evident as he told me he had no desire to stay in Tijuana for over a year. In describing his journey thus far, he mentioned hopes of finding his parents, a higher education, and a more hopeful future.

One of the first questions he asked was about my education. Although I did not think much about it the first time he asked, I started to notice his burning interest as he continued to inquire first about objective and then subjective aspects related to my learning. He began with more general questions about the American learning system. When I told him I spend about 35 plus hours at school each week, he looked at me in shock. He exclaimed, “¡sólo fui a la escuela un día a la semana por 10 horas!” He explained because of accessibility issues, students could only spend one day each week at his school. In his eyes, I did not see jealousy, instead, hearing of my education and his own potential sparked a flame within him. Almost immediately, he started to describe his hope to attend a public college in Texas and even asked me if I knew which were the most prestigious.

When he asked which major I was planning on pursuing, I stood there quizzically in silence. At this point, I realized I had no idea how describe “Computer Science” in Spanish. I said the words, “ciencia computadora?” which is an extremely literal translation of the words. His face filled with immediate confusion and for the next 10 minutes we inadvertently began playing a game of charades. We took turns acting and providing hints through singular words in a shared understanding in order to describe coding. Finally, after the long game of Spanish charades, he seemed to understand the idea; however, not only was I filled with relief that he understood me, but I also began thinking about the significance of terms like “Computer Science” that I failed to realized were so crucial to describing myself and yet I often took for granted.

Just three hours prior to our conversation, I remember sitting in our van heading to the soup kitchen. I was stressing about my homework load and even a computer science project; but now here was my new friend, in Tijuana, with no immediate family nearby or clear plan except a steady goal to achieve a higher learning. At this point I realized how deeply rooted my ignorance was to the subject of education. Living in a bubble community always allowed me to make subconscious assumptions that, for example, everyone knew the term “Computer Science.” Other small assumptions similar to these represent a failure to recognize my privilege. Having access to a computer or the Internet is always an option for me; however, the friend I made in Tijuana cannot afford those luxuries. Not having constant access to the news becomes a disadvantage for him, especially now in the heat of new, more restrictive border regulations.

Returning from Tijuana, I was hyperconscious to the small complaints about schoolwork from my peers; my first reaction was to silently scold my classmates for their ignorance, until I realized I had done the same numerous times in the past. This new consciousness has proved to be not only a reminder to take advantage of the opportunities I have in front of me, but also avoid putting so much weight on my grades; instead focusing of numerical values, I should prioritize and foster an incalculable desire to learn. Although sometimes I do get caught up in the competition to best myself with higher grades, I often flip back to the notes I took following our conversation as a reminder to reevaluate my attitude.

Written by A. Yang