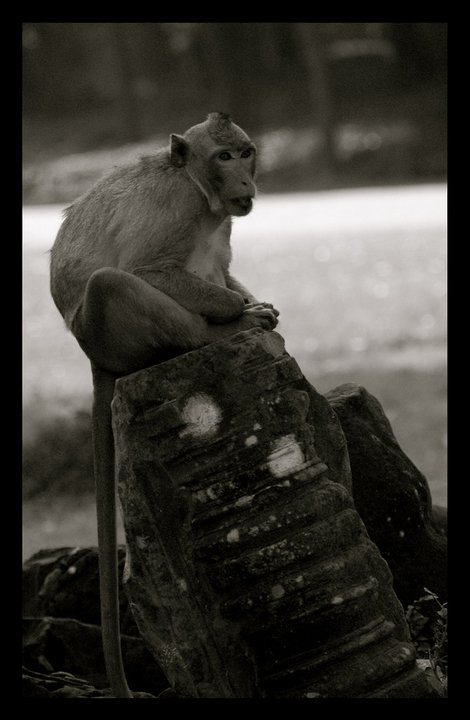 From the time we heard the plan for today, all anyone could talk about was the fact that we would be riding elephants. After what was comparatively a late start (we left the hotel at 7:30), we headed to the temples for the third time. We were soon on the elephants and bobbing peacefully along the road, blocking traffic. As it turns out, riding an elephant involves a consistent rocking motion that makes it hard to believe that people once used these animals to travel long distances. Our ride ended up being a regular trip to the zoo: we were treated to a wonderful view of monkeys and a wild pig. We got a chance to pet the elephants and feed them bananas, but sadly we were not allowed to bring them home with us. In spite of a little snot, we all enjoyed seeing the elephants.
Afterwards we set out to our final Cambodian temple. Misnamed “The Women’s Temple” due to its small size, unusually pretty color, and stunning detail, this was easily the smallest temple we visited. The carvings that graced all the temples were much deeper and more intense here.
After lunch came the real highlight of the day: The Cambodia Landmine Museum Relief Fund. It was here that we met Bill and Jill, Americans who had moved to Cambodia specifically to work with this organization. They gave us a vary scary history lesson about Cambodia and the legacy of landmines. They told us about the landmines scattered all across the globe from as early as World War I. We also met the founder, Aki Ra, who had been a child soldier during the rein of the Khmer Rouge and had been forced to set landmines. After the rein of the Khmer Rouge ended, Aki Ra decided to dedicate his life to disabling landmines, including ones he himself had planted. His cited goal is to makes his country safe for his people, and he has no intention of stopping until that happens–well aware of the fact that he will be working for the rest of his life.
The Fund works both to inform and raise money. They send groups to villages to safely remove the landmines. In addition, the museum grounds house 37 children who were injured by landmines, have parents who are unable to care for them due to landmines, are otherwise orphaned, so poor their families cant feed them, have polio, or were victims of thalidomide or agent orange. These children are fed, clothed, housed and taught on site. They go to public school in the morning, do additional work including English in the afternoon and do chores. Because of Cambodian law, a person must begin school in first grade, regardless of their age. As a result, the high school English class we visited ranged in age from 15 to 22 years old.
Although they lead, what would be by our standards, impossible lives; these were some of the happiest kids we had ever met. They were thrilled to practice their English with us, and quickly pulled us into their games. Teams were created and volleyball, the most popular sport in Cambodia, was enjoyed by all who participated. Several of us were dragged into some traditional Khmer games. Their first game was played rather like horseshoes, except that 5 seeds (about two inches in diameter) were set up, the goal was to throw more seeds at the four outer seeds and knock them down without hitting the center seed. A team lined up behind each configuration and the losing team would be hit on the knee with two seeds by each member of the winning team, which was clearly the highlight of the game. After a game that was something like organized tag, we played a quick round of their version of duck duck goose, in which there was no true winner and the chaser’s only goal was to hit the chased with a cloth as many times as possible (we began to sense a theme). It was amazing to watch a girl with one arm, or a prosthetic leg participate in a game that involved running, but nobody seemed to mind and everyone had a great time.
More to come soon,
Clarissa
Cambodia Student Trips,Live Learn Travel,PWT Guest Bloggers,Student Community Service,Student travelers