Santa Barbara students in Vietnam
Day 7 – Hanoi
This morning we woke up in Hanoi, after some failed wake up calls and early morning runs, we finally boarded the bus a little late and sleepy. 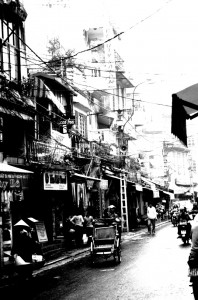 We drove off past Hoan Kiem Lake where we saw the floating pagoda and the preserved 500 year old turtle, who’s 500 year old female mate still resides in that same lake. Our first stop was to Vietnams First University which was built in the 11th century. The architecture of the pagodas and the pools and flower structures were quite intricate.
We had planned next to go to Ho Chi Minh’s Mausoleum. As it happens, today was a Vietnamese holiday, and the lines to the mausoleum looked a dozen blocks long and would have taken at least two hours to get through, so  instead we went on to the Hoa Lo Prison, more commonly referred to as the “Hanoi Hilton.” As in the mausoleum, we were surrounded by small children taking a field trip from school to see some of Vietnam’s most culturally significant landmarks.
The prison, as the Vietnamese presented it, did indeed seem to have many of the luxuries as a hotel, but we had to keep in mind that we were in a place used by the government for the torture and imprisonment of American pilot– so the real treatment of the detainees (especially of the political prisoners) would most likely not be accurately shown. The propaganda was obvious in some parts, mostly with the pictures of Americans decorating a room with Christmas decorations and playing games like cards, chess, and volleyball. 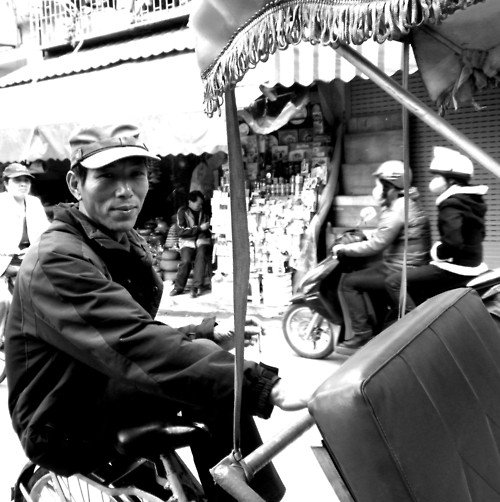 After the “Hanoi Hilton,” we stopped at the One Pillar Pagoda, the sole pagoda atop a traditional square koi pond, with the usual offerings of crackers, candies, and burning incense. Next we went back, but did get to witness the switching of the guards, which was a surprisingly formal affair, involving some extremely coordinated steps and gun routine. Despite his strong wishes for a humble burial and equally posthumous remembrance, the Vietnamese government erected a massive and elaborate tribute to him, and his name and face cover the entire city. Ho Chi Minh’s palace near the Mausoleum, bright yellow and a very beautiful building, was actually not used by him in his daily life, but only used for formal state affairs and to house visitors. We saw his “house on stilts,” where he lived until his death, the huge pond next to it, and more housing quarters. The grounds of the entire palace were very impressive and definitely fit for the king-like figure Ho Chi Minh represents for the Vietnamese people.
After the mausoleum and lunch we went for a fun yet slightly terrifying pedi-cab ride, whizzing through afternoon traffic, and then out to the shopping streets. After some free time and dinner, everyone went in for an early night. All in all, we had a wonderful, and jam packed day! Looking forward to our full day at the Peace Works Travel Village tomorrow.
We are all doing great and send everyone our love!
Cecily
PWT Guest Bloggers,Student travelers,Vietnam Student Trips