From a Rwandan Dump to the Halls of Harvard 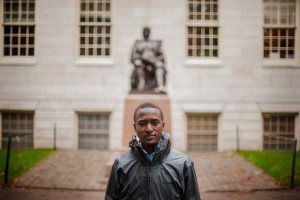 Justus Uwayesu, rescued at 9 from the streets of Rwanda, is enrolled as a freshman at Harvard.Credit Ian Thomas Jansen-Lonnquist for The New York Times

BOSTON — Nine years old and orphaned by ethnic genocide, he was living in a burned-out car in a Rwandan garbage dump where he scavenged for food and clothes. Daytimes, he was a street beggar. He had not bathed in more than a year.

When an American charity worker, Clare Effiong, visited the dump one Sunday, other children scattered. Filthy and hungry, Justus Uwayesu stayed put, and she asked him why.

“I want to go to school,” he replied.

Well, he got his wish.

This autumn, Mr. Uwayesu enrolled as a freshman at Harvard University on a full-scholarship, studying math, economics and human rights, and aiming for an advanced science degree. Now about 22 — his birthday is unknown — he could be, in jeans, a sweater and sneakers, just another of the 1,667 first-year students here.

But of course, he is not. He is an example of the potential buried even in humanity’s most hopeless haunts, and a sobering reminder of how seldom it is mined.

Over the 13 years since his escape from the smoldering trash heap that was his home, Mr. Uwayesu did not simply rise through his nation’s top academic ranks. As a student in Rwanda, he learned English, French, Swahili and Lingala. He oversaw his high school’s student tutoring program. And he helped found a youth charity that spread to high schools nationwide, buying health insurance for poor students and giving medical and scholastic aid to others.

He is nonetheless amazed and amused by the habits and quirks of a strange land.

Fresh from a land dominated by two ethnic groups — the majority Hutu and the Tutsi, who died en masse with some moderate Hutu in the 1994 conflict — he says he is delighted by Harvard’s stew of nationalities and lifestyles. He was pleasantly taken aback by the blasé acceptance of openly gay students — “that’s not something we hear about in Rwanda”— and disturbed to find homeless beggars in a nation otherwise so wealthy that “you can’t tell who is rich and who isn’t.

He says his four suitemates, hailing from Connecticut, Hawaii and spots in between, have helped him adjust to Boston life. But he is still trying to figure out an American culture that is more frenetic and obstreperous than in his homeland.

“People work hard for everything,” he said. “They do things fast, and they move fast. They tell you the truth; they tell you their experiences and their reservations. In Rwanda, we have a different way of talking to adults. We don’t shout. We don’t be rowdy. But here, you think independently.”

Born in rural eastern Rwanda, Mr. Uwayesu was only 3 when his parents, both illiterate farmers, died in a politically driven slaughter that killed some 800,000 people in 100 days. Red Cross workers rescued him with a brother and two sisters — four other children survived elsewhere — and cared for them until 1998, when the growing tide of parentless children forced workers to return them to their village.

They arrived as a drought, and then famine, began to grip their home province. “I was malnourished,” Mr. Uwayesu said. “My brother would tell me, ‘I’m going out to look for food,’ and then he would come back without it. There were times we did not cook the whole day.”

In 2000, young Justus and his brother walked to Kigali, Rwanda’s capital and a city of about one million, in search of food and help. Instead, they wound up at Ruviri, a sprawling garbage dump on the city’s outskirts that was home to hundreds of orphans and herds of pigs.

Justus found a home with two other children in an abandoned car, its smashed-out windows and floor covered with cardboard. For the next year and a half, he said, all but the search for food and shelter fell by the wayside. “There was no shower, no bathing at all,” he said. “The only thing was to keep something warm for the night, something really warm.”

He learned to spot trucks from hotels and bakeries that carried the tastiest castoffs, and to leap atop them to grab his share before they discharged their loads to less nimble orphans.

For days when there was nothing to eat — no trucks came on Sundays, and bigger children claimed most edible garbage — he hoarded food in discarded cooking-oil tins, sunk into trash-fire embers to keep their contents warm.

Mr. Uwayesu said he was hobbled in a fall from one moving trash truck, and once nearly buried alive by a bulldozer pushing mounds of garbage into a pit.

Just 9, he spent nights in terror that a tiger said to roam the dump would attack him (there are no tigers in Africa). In the daytime, begging on the streets, he saw a world that was beyond him. “At noon,” he said, “kids would be coming back from school in their uniforms, running and playing in the road. Sometimes they would call me nayibobo” — literally, forgotten child. “They knew how different we were from them.”

“It was a really dark time, because I couldn’t see a future,” he said. “I couldn’t see how life could be better, or how I could come out of that.”

The charity that Ms. Effiong founded, in New Rochelle, N.Y., Esther’s Aid, decided in 2000 to center its efforts on helping Rwanda’s throngs of orphans. One Sunday in 2001, after delivering a shipping container of food and clothing, she took a taxi to the dump, spotted a scrum of orphans and, after some conversation, offered to take them to a safe place.

All but Justus refused. “I took him to where I was, cleaned him up, changed his clothes, dressed the wounds on his body and eventually sent him to primary school,” she said.

In first grade, he finished at the top of his class. It was a sign of grades to come: straight A’s in high school, followed by a seat in a senior high school specializing in the sciences.

Mr. Uwayesu moved into an orphanage run by Esther’s Aid, then, with two sisters, into the compound where Ms. Effiong lives while in Kigali. Throughout his schooling, he worked at the charity, which since has opened a cooking school for girls and is building a campus for orphans.

“My life changed because of her,” he said.

He would not have been able to compete for a spot in an American university without outside help, however. After high school, he applied for and won a seat in a yearlong scholars program, Bridge2Rwanda, run by a charity in Little Rock, Ark., that prepares talented students for the college-application process.

For roughly the past decade, Harvard’s international admissions director has personally scoured Africa for potential applicants each year.

Like most top universities, Harvard chooses its freshmen without regard to their ability to pay tuition. But until this year, the Cambridge campus had only one Rwandan student, Juliette Musabeyezu, a sophomore.

No more. Of the 25 or so African applicants who made this year’s cut, three are from Rwanda, including a second Bridge2Rwanda scholar.

Not bad for a little country that is home to barely 1 percent of Africa’s billion-plus population.

The Power of a Picture: The Napalm Girl
In this Emmy Award Winning ABC7 Special, featuring Peace Works Travel, meet the girl in the picture-Kim Phuc, the photographer,…