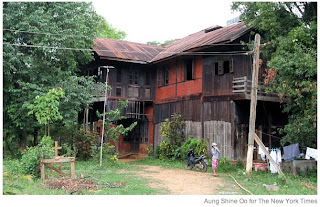 KATHA, Myanmar — George Orwell created his first novel, “Burmese Days,” a scathing portrait of the imperious attitudes of the British, from this former colonial outpost on the banks of the mighty Irrawaddy River. His brutish characters swilled too much whiskey at a whites-only club, and wilted in the vaporous heat. A train that crawled through the jungle from Mandalay provided a lifeline to the outside world.

The British have long gone, but Katha, camouflaged in the book as Kyauktada, survives as isolated as ever, one of the most tantalizingly difficult places to reach in the rugged precincts of northern Myanmar, formerly Burma. 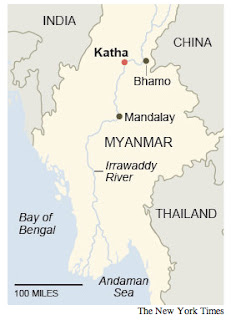 The remaining whiff of Orwell, whose five years at various stations in Burma as an officer of the Imperial Police Force ended here in 1927, is a spacious two-story wooden house with fireplaces and a once-elegant staircase. Paint peels off the walls, and dust coats the interior. The outdoor kitchen where Orwell’s servants cooked his meals lies in ruin, the roof missing and dead leaves piled on the floor. The family members of a government official squat in an annex, and hang their laundry outside the front door.
Most people in this town of 23,830 — like the British, the local authorities keep precise records — appear unfamiliar with Orwell. The junta that ruled Myanmar admired the anti-imperial spirit of “Burmese Days,” but translations in Burmese were scarce, said Nyo Ko Naing, a cartoonist and graphic designer who has joined a small group of local Orwell aficionados to encourage the authorities to restore the house and its unkempt garden, with its three acres of frangipani and flame trees. 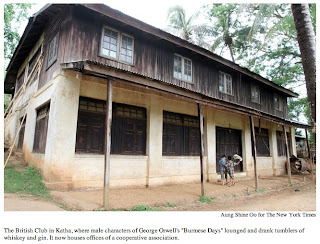 Last month, a minister from the provincial capital came to inspect the house. Mr. Nyo Ko Naing has mounted photographs of Orwell memorabilia in his wife’s restaurant to pique interest. Among the exhibits: an old cover of “Burmese Days” with an Englishman lounging with his feet up and his dog comfortably resting on a stool next to him. A forlorn Burmese servant stands behind, waving a fan to cool his master.
“We don’t have formal word from the government yet,” Mr. Nyo Ko Naing said. “But we hope they will restore it.”
Hardy Orwell readers from abroad drift into Katha from the occasional leisure cruises that ply the Irrawaddy. The other option is a jaw-shattering six-hour road trip, from Bhamo, near the Chinese border, which means traversing 100 miles over gullies of dirt and rock at a plodding pace like the train in 1927.
Wildlife smugglers are willing to take passengers from Bhamo to Katha for $350 round trip, more expensive than most domestic air tickets. The price is steep because human passengers take the place of the smugglers’ usual fare: fat Burmese cobras packed in wooden crates for transport to China.
Convoys of motorbikes weighed down with illicit loads of teakwood heading for buyers in China are the only passing traffic.
The novel is full of references to what Orwell called “wood extraction,” but the forests that lured the British to Burma have been decimated by rampant illegal logging. A landscape of low-lying scrub and plantings of new rubber trees testifies to that. The sublime wild orchids of Orwell’s period — nestled in tree trunks, hanging from eaves — have vanished.
Some things in Katha remain intact. Orwell wrote of a dawn market brimming with “pomelos hanging on strings like green moons,” “brittle dried fish tied in bundles,” “ducks split open and cured like hams,” and “chickens cheeping in wicker cages.”
That variety still exists. On a recent morning, there were globes of mauve eggplant; baskets of pale green tamarind leaves; five kinds of brown mushrooms; slivers of yellow bamboo shoots; tiny crimson chilies; pyramids of pink lychees; and seven crates of different size brown, tawny and white eggs. Hawkers of heart-shaped green betel leaves did a brisk business.
Missing delicacies from Orwell’s era were the “heliotrope-colored prawns the size of lobsters.”
“We get them only occasionally,” said Ma Nge, a fish seller, blood oozing through her fingers from the catfish she was dicing on a wooden board. Flies clambered over the rows of fish laid out on her counter, as her husband, Ye Myint, swatted them away with a bedraggled T-shirt.
The snobbery and ignorance of the British overseers in Burma are exemplified by Orwell’s youngest creation, a 22-year-old naïf named Elizabeth Lackersteen who arrives here with her blond hair bobbed into an Eton crop, the mode of the late 1920s, and wearing fashionable tortoiseshell glasses. She comes in search of a husband.
Flory, a British timber merchant with a birthmark down one side of his face, the only character who shows empathy with the Burmese and who despises the boozers and bores of the British Club, falls for her.
He tries to interest her in local culture, taking her to a pwe, a Burmese play performed by gaslight outdoors on the street. She recoils at the “smelly natives,” calls most things “beastly” and prefers to laze in a drawing room perfumed by “chintz and dying flowers.”
Elizabeth’s favorite haunt is the British Club, where the men wear khaki shorts and topee hats and berate the Burmese servants for running low on ice for their tumblers of whiskey and gin. The club, a modest tin-roofed building, still stands, a short walk from Orwell’s house. En route, the tennis court from the novel has been modernized with a hard surface, and Ko Toe, 39, a professional coach, teaches classes in the mornings and evenings.
Remarkably, an original official diary dated 1874 to 1949 with almost daily entries in spidery handwriting in Burmese script tells much of what happened from the time the British came until after they left at independence in 1948.
The pages are curled from age and heat, the ink faded. But entries about salaries, costs of transportation, and George V ascending to the British throne in May 1910 are still legible.
In the novel, Elizabeth spurns Flory, who, overcome by desolation and rage, shoots himself. In turn, she is spurned by Lieutenant Verrall, a rude — even by British Club standards — polo-playing young army officer. At the end of the novel, the villain, U Po Kyin, an exceptionally rotund magistrate, moves to another district for a plum job.
“The bad guys win,” said Mr. Nyo Ko Naing, who has read the novel five times, searching for authenticity about old Katha. “I hate the judge. All the characters of the Myanmar military regime share the same character as the judge. I like Flory. He has a good heart.”
By JANE PERLEZ

Cuba Scenes
Santiago Salazar takes us on a photographic journey through everyday life in Cuba.