Lessons in War and Peace 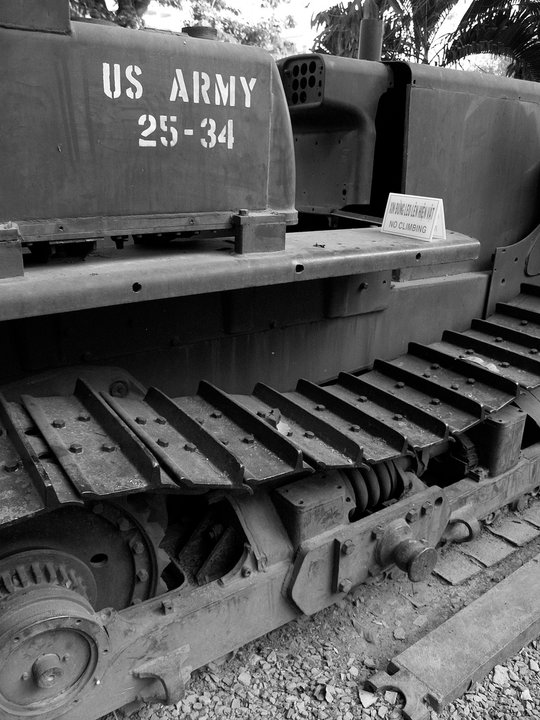 It was our first day waking up in Ho Chi Minh City, or Saigon, as most locals still call it. After being toured around the city by our new tour guide, Mr. Trang, we headed to the Vietnam War Remnants Museum, and had more than an hour and a half to explore the multi-tiered building. First, we checked out the prison exhibit and learned about the despicable acts of torture that were inflicted upon political prisoners in South Vietnam. The worst was the tiger cage, a 5 by 7 foot barbed wire box that 3-5 people were crammed into for days at a time. Then we made our way into the main building, and saw exhibits documenting the effects of the war on Vietnam, and it gave us a new perspective on the war. Downstairs we saw the world’s opinions of the US during the war, with pictures of protests in the US (like those at Kent State) and in the rest of the world. Another exhibit traced the long-term effects of agent orange on both Vietnamese and American soldiers, and especially their decendants. Although the museum had heavy undertones, we were uplifted by an exhibit completely dedicated to children’s drawings that illustrated hopes for world peace and understanding.
We left the museum and had time to spend about an hour in the market. First, we strolled by the produce section, which meant squirming live frogs, crabs, and fish, and smell none of us had ever had the pleasure of experiencing before. We were able to practice our bargaining skills; we keep hearing we’ll need them in the Mekong Delta, but that waits to be seen.
For lunch, we changed things up a bit: Italian food. Most of us were pretty excited to hear that pizza, pasta, and garlic bread were in our futures. Although it was good, it wasn’t up to par with the Italian food we are used to at home. It elicited a little bit of homesickness, but we’re still good to go for the rest of the week.
After freshening up in the hotel, we left for the the Little Rose Shelter, a rehabilitation home for girls who were forced into the human trafficking business. To be honest, we would have like to spend some more time there. The purpose of the visit was to raise our awareness of human trafficking in the world, but the tour of the building and some brief games with a few of the girls was not nearly enough to learn about such a crippling problem.
We don’t even know how to describe our eventful evening. It began with a water puppet show; the puppeteers manipulate the puppets so the puppets appear to float across the water. It was an entertaining concept, and we learned some traditions and cultural ideals of Vietnam.
Then… get ready… DINNER ON A RIVERBOAT. Yes. We climbed onto a huge river boat, had a three-course gourmet meal served to us, and watched Spanish Flamenco Dancers (we were confused too) dancing to Abba and other various genres as we ate. It was unexpected, yet completely unforgettable.
Off to the Cu Chi Tunnels tomorrow, then our last stop of the trip in the Mekong Delta!
Cháo!
Joey, Savannah, and Walker
Peace Works Travel,PWT Guest Bloggers,Student Community Service,Vietnam Student Trips

Malia’s Journey
What would it be like to travel from Haiti through Venezuela, Colombia, Panama, Costa Rica and Mexico in order to…