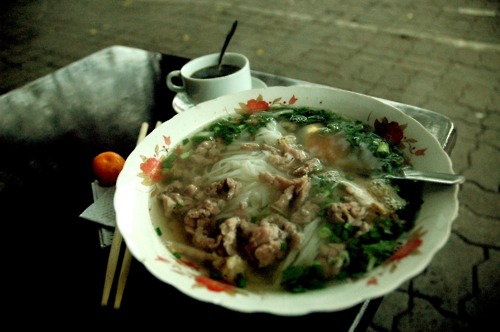 Our group awoke Sunday morning on our beloved night train around 5:35, and quickly exited. Everyone seemed very tired after so much traveling in a short time. Us students were excited to hear that we would be returning to our Hanoi hotel where we would meet up with the South to North group for breakfast and discussion. After a short bus ride, we were back at the hotel, where we were greeted warmly by Mr. Taylor and his crew, a few students who had woken up early enough to meet us. Amid a buffet breakfast and a familiar view of Hanoi, old friends gave each other tips on how to best enjoy the opposite trip. Aside from a few notes on wearing bug spray and the quality of the food, the other group preferred to keep much of their experience to themselves, which hopefully will let us shape our own experiences.
We headed to the bustling Hanoi airport. It was sad to cross the Red River for the last time. We all said our goodbyes to Alex, our tour guide, who had led us around the North, and who Ross especially had grown close to in such a short time. We boarded our flight on Vietnam Airlines, which, to our surprise, was a huge and nice plane. Among other Vietnamese passengers also making the journey from the North to the South, we were able to discuss our trip thus far.
The first thing we noticed after landing was the humidity and heat of Saigon, a sharp contrast from our Northern home bases. We applied our bug spray (after hearing the other groups’ experiences) and headed out into the hot city air. Our new guide Trang awaited us with a smile and a Vietnamese song. We boarded yet another bus which took us into downtown Saigon. Immediately we noticed the contrast between this city and Hanoi went further than the weather. The shops were well settled, Westernized and developed, as opposed to the Hanoi street vendors. Stores such as Louis Vuitton lined the roads, instead of knockoff booths. The street traffic was a lot lighter and seemed more organized, posing less danger to students crossing the streets.
We ate lunch at Pho24, a chain noodle soup restaurant, which we had previously visited in Hanoi. Pho was nothing new or exciting, but the famliar chicken soup was enjoyed by all. Since our hotel rooms weren’t yet ready, we decided to explore more of Saigon. Our first stop was the Presidential Palace, a 70s-style building flocked with tourists like us. We were able to enter and explore meeting rooms, dining rooms, radio facilities, and a museum. The building, used by the Southern Vietnamese government, was well-protected yet somewhat modest, a contrast to American government buildings and even political sites like the Ho Chi Minh mausoleum which seem lavish and over-the-top. However, it was well-preserved and clearly respected by the Vietnamese people.
We headed to our hotel and then out to dinner, which to our amusement featured decorated food such as a large melon carved like a clown and stuffed with fish. The food seemed similar to what we were used to in the North with a few pleasant surprises like chocolate-coffee ice cream to end the meal.
Back at the hotel, we collected our dirty clothes for some much-needed laundry. We were interested to find that many Vietnamese utilize laundromats, unlike Americans who are used to doing it in the comfort of their own homes. We were then given the opportunity to explore the city on our own and immerse ourselves in the nightlife of Saigon. The group traveled to a six-story ice cream parlor with an exotic menu. The building’s size was a change from Hanoi, which featured buildings with stores on the first floor only and homes on the second stories. Some opted for the traditional banana split at this ice cream parlor, while others sampled avocado ice cream.
We then headed towards the local market, an outdoor mecca of knockoff goods and jewelry. We were forewarned about the dangers of thieves and pickpockets, so we traveled cautiously, but the people we encountered were mainly pleasant, if not a bit pushy with their goods, much like the women of Sapa.

Many of us exercised our bargaining skills which we had developed in Hanoi and Sapa, utilizing our two-dollar bills to lower prices. The market seemed much less chaotic and more organized than any we had seen previously, with each stall specializing in a unique product. The vendors seemed accustomed to tourists and spoke English well, so we assumed that most who went to the market were probably not locals. Their desire to appeal to us Americans reflects what we think to be Vietnam’s shift to a global economy.
We returned to the hotel tired but cheerful as we examined each other’s purchases and headed off for some much-needed sleep before another day in the city!
xoxo
Emily and Gonzalo
Education Travel,PWT Guest Bloggers,Student travelers