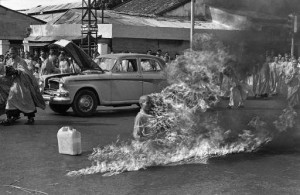 Malcolm Browne, an Associated Press reporter who captured one of the most iconic images of the Vietnam war, passed away Monday, September 27th.
David Hume Kennerly reflects on his work and life in an article published today in the Huffington Post.
“Once you’ve seen a world-class news photograph, it’s impossible to get that image out of your mind. If television brought the Vietnam War into your living room, it was the still photo that transported it directly to your heart.
Associated Press reporter Malcolm Browne took one of the greatest photographs from the Vietnam War. He wasn’t a professional photographer, but that’s irrelevant. The image, a searing portrait of a Buddhist monk who set himself on fire on a Saigon street as a protest against the government, will always be regarded as one of the most essential and vivid landmarks along the torturous path of modern Vietnamese history.

That photograph had an enormous impact on President John F. Kennedy, and triggered a series of events that ultimately led to the overthrow and murder of South Vietnamese President Ngo Diem. The power of a picture should never be underestimated.

Read the Full Story
Students analyze the significance all three photographers made to 20th century wartime journalism with our dynamic curriculum. Teachers are invited to download, print and share the Iconographic Photography of Vietnam classroom lessons. What do your students think? We’d love to hear their reflections on the impact of these images 40+ years later.
Contact us for the the “Iconographic Photography of Vietnam classroom lessons”.