The U.S.S.R. and U.S. Came Closer to Nuclear War Than We Thought

A series of war games held in 1983 triggered “the moment of maximum danger of the late Cold War.” 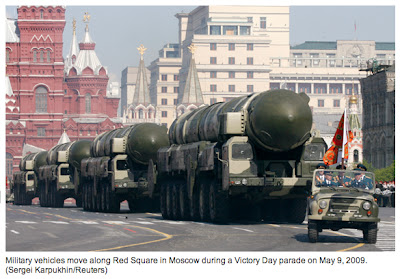 An ailing, 69-year-old Yuri Andropov was running the Soviet Union from his Moscow hospital bed in 1983 as the United States and its NATO allies conducted a massive series of war games that seemed to confirm some of his darkest fears.
Two years earlier Andropov had ordered KGB officers around the globe to gather evidence for what he was nearly certain was coming: A surprise nuclear strike by the U.S. that would decapitate the Soviet leadership. While many didn’t believe that the U.S. had such plans, they dutifully supplied the Kremlin with whatever suspicious evidence they could find, feeding official paranoia. 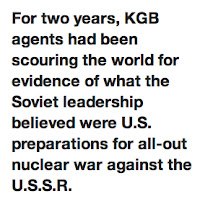 The Western maneuvers that autumn, called Autumn Forge, were depicted by the Pentagon as simply a large military exercise. But its scope was hardly routine, as Americans learned in detail this week, for the first time, from declassified documents published by the National Security Archive, a Washington-based nonprofit research organization.
To the Russians, it could easily have looked like a genuine preparation for a nuclear strike, the documents revealed: A total of 40,000 U.S. and NATO troops were moved across Western Europe, including 16,044 U.S. troops airlifted overseas in 170 missions conducted in radio silence.
More ominously, U.S. and NATO officers practiced the procedures they would have to follow to authorize and conduct nuclear strikes in an unpublicized exercise called Able Archer 83, shifting their headquarters as the game escalated toward chemical and nuclear warfare. In communications, they several times referred to non-nuclear B-52 sorties as nuclear “strikes” — slips of the tongue that could have been intercepted by Soviet eavesdroppers.
While historians have previously noted the high risk of an accidental nuclear war during this period, the new documents make even clearer how the world’s rival superpowers found themselves blindly edging toward the brink of nuclear war through suspicion, belligerent posturing and blind miscalculation.
In a coincidence that could have proved catastrophic, the script for the maneuvers dovetailed snugly and perilously with the Soviets’ fears that they were under threat, coupled with nagging doubts about their ability to protect themselves from U.S. military might.
The problem with this brinksmanship was that it increased the risk of a nuclear exchange due to miscalculation, according to Nate Jones, a Cold War historian with the National Security Archive who edited and published the collection of more than 50 documents, totaling more than 1,000 pages, in three installments beginning May 16 and ending Thursday.
Ranging from presidential note cards to previously secret CIA reports, the documents describing Able Archer 83 offer fresh insight into a much studied but incompletely understood episode in the U.S.-Soviet rivalry. “This episode should be studied more because it shows that U.S. leaders might not have learned as much from the Cuban missile crisis [about avoiding accidental conflict] as they should have,” Jones said.
In the current edition of the Journal of Strategic Studies, Israeli historian Dmitry Adamsky calls the 1983 war games “the moment of maximum danger of the late Cold War.” Able Archer, he wrote “almost became a prelude to a preventative nuclear strike.”
The March 1984 edition of Air Man Magazine , a rare detailed public account, called Autumn Forge “the biggest North Atlantic Treaty Alliance show of force of the year — a test of military readiness in the context of NATO’s deterrent mission.” But the article emphasized the air lift, never mentioning rehearsal for nuclear war.
Even the troops on maneuver tried not to draw too much attention to themselves. At Dusseldorf Airport, the 45th Tactical Air Wing commander had his planes park away from the passenger terminal to keep a low profile. Most travelers, he was sure, were not even aware of troop activity at the airport.
But the Pentagon knew that the Soviets were monitoring his troops’ every move. “The series of exercises are watched very carefully by the Eastern Bloc nations, just as we try to watch their exercises as closely as we can, to learn tactics and procedures,” Air Force Maj. Gen. William E. Overacker told Air Man.
The impetus for the exercise came from the White House, “where they wanted to stare down the Soviet bear,” said Jones.
Tensions had heated up that September, after the Soviet shoot-down of Korean Air Lines Flight 007, which had strayed into Soviet air space. The administration responded with stepped-up surveillance, and provocative naval maneuvers, and pressed for the deployment of new Pershing II missiles in Europe capable of reaching Moscow in less than ten minutes.
Considered in a vacuum, Able Archer 83, in which officer’s at NATO’s Belgium headquarters practiced their response to hypothetical chemical and nuclear conflict with a thinly-disguised Soviet Union, might not have seemed particularly threatening.
But for two years prior to Able Archer 83, KGB agents had been scouring the world for evidence of what the Soviet leadership in general — and Andropov in particular — believed were U.S. preparations for all-out nuclear war against the U.S.S.R.
The massive intelligence-gathering effort, called “Operation RYAN,” pressured the KGB to find proof that the U.S. was planning a “decapitating” strike against Moscow with its nuclear forces. (The Russian acronym derives from Raketno-Yadernoye Napadeniye, or nuclear missile strike.)
According to an unclassified summary of the nuclear exercise scenario, prepared for the National Security Archive by a NATO historian, the war game began with briefings on an imaginary East-West conflict in the Middle East, including “Orange” — that is, Soviet — arms deliveries to Syria, coupled with unrest in Eastern Europe.
Rising tensions and a change in the Soviet leadership triggered an invasion by the Red Army of Yugoslavia, Finland, Norway and Greece, according to the exercise scenario. After the “Orange” Soviets finally attacked “Blue” — U.S. and NATO forces — with chemical weapons, NATO decided to respond with two series of nuclear strikes. 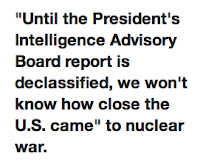 The Soviets certainly made no secret of their fears at the time. One key document, released by the Library of Congress, describes how Andropov repeatedly warned that the U.S. was approaching the “red line” leading to nuclear war when he met with veteran U.S. diplomat Averell Harriman in June 1983.
But President Reagan was unsure if the Soviets were really convinced that the U.S. was preparing a sneak attack on them, or were merely ” huffing and puffing,” as Reagan asked his ambassador to the U.S.S.R. in 1984.
There was skepticism in Washington about Andropov’s sincerity. Three days after the end of Able Archer 83, the CIA issued a Top Secret Joint Net Assessment of U.S. and Soviet strategic forces that assured senior administration officials that the balance of forces “is probably adequate to deter a direct nuclear attack on the United States.” It did not acknowledge the possibility of nuclear war through miscalculation.
Another Top Secret CIA analysis, written six months after Able Archer 83, shows how profoundly the spy agency may have misread the Kremlin’s thinking. “We believe strongly that Soviet actions are not inspired by, and Soviet leaders do not perceive, a genuine danger of imminent conflict or confrontation with the United States,” its authors wrote.
It acknowledged, however, that since the Able Archer exercise, the Soviet military had stepped up its activity and deployed new weapons and forces.
Even if his intelligence advisers were sanguine, Reagan himself was worried after the exercise that the Soviets genuinely feared the U.S. was preparing to commit nuclear aggression, writing at one point in his diaries that “I feel the Soviets are so defense minded, so paranoid about being attacked that without being in any way soft on them we ought to tell them that no one here has any intention of doing anything like that. What the h–l have they got that anyone would want.”
Moscow’s reaction to the November 1983 war games is not well documented, partly because obtaining material from Russian government archives has become increasingly difficult since the 1990s. “I wouldn’t say it has stopped, but it’s proceeding at a glacial pace,” Jones says.
But Russia isn’t the only country hanging onto some of the secrets surrounding the 1983 war scare.
The papers of former Washington Post reporter Don Oberdorfer include a summary of what Jones says may be the most comprehensive account of the Able Archer 83 ever written, a classified 110-page report completed in 1990 by the President’s Intelligence Advisory Board.
The report has never been released, but Oberdorfer’s notes, based on an interview with a confidential source, say it concluded that the 1983 “war scare was an expression of genuine belief on the part of Soviet leaders that US was planning a nuclear first strike, causing Sov(iet) military to prepare for this eventuality, for example by readying forces for a Sov(iet) preemptive strike.”
The note concludes in telegraphic style: “If so, war scare a cause for concern.”
Jones says the 1990 report to President George H. W. Bush may be the most comprehensive account ever written on what happened during those five days in November of 1983, but he’s been fighting to get it declassified without success since 2004. “Until the President’s Intelligence Advisory Board report is declassified, we won’t know how close the U.S. came” to nuclear war, Jones said.
DOUGLAS BIRCH May 28, 2013
The Center for Public Integrity is a non-profit, independent investigative news outlet. For more of its stories on this topic go to publicintegrity.org.

The Lingering War
Insightful student traveler Delilah Napier takes a historic look at the effects of the Secret War in Laos. Its citizens,…