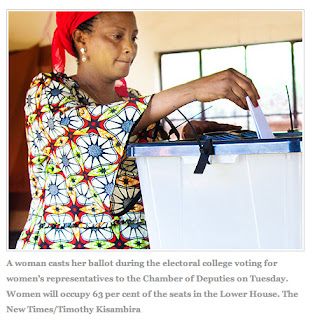 The just-concluded parliamentary elections have handed women an overwhelming majority in Rwanda’s Parliament, an unprecedented 64 per cent of the seats in the Chamber of Deputies.
An analysis of the final preliminary results from the three-days voting shows that women will occupy 51 out of the 80 seats in the Lower House..
This means Rwanda remains the only country in the world with a female dominated parliament, having first achieved the feat in the 2008 polls when women took up 56 per cent representation in the House of Representatives – a world leading figure.
Besides the 24 exclusive women seats which were decided in Tuesday’s indirect election, women also won 26 of the 53 openly competed for seats in Monday’s general election as well as one of the two slots reserved for the youth in yesterday’s poll.
How women got it
Observers attribute women’s impressive show in the elections to political parties’ decision to give both genders equal chances of making it to parliament as opposed to past tendencies when men would largely occupy more strategic positions on party electoral lists.
For instance, during the Rwanda Patriotic Front (RPF) primaries at the grassroots it was the party’s unwritten rule for the voters to pick both a man and a woman in keeping with the gender equality principle.
Subsequently, both sexes were practically allocated equal number of seats on the party’s 80-member list of parliamentary candidates, which also included eight from its four coalition partners.
As a result, out of 41 seats that went to the RPF-led coalition during the universal suffrage for the 53 openly contested seats, 20 of them are occupied by women, representing 49 per cent.
In the Social Democratic Party (PSD) camp, four out of the seven candidates who made it to Parliament are women, while two out of the five seats won by the Liberal Party (PL) went to women.
However, some say women’s fast-rising clout is down to hard work in recent years, facilitated by gender friendly policies which the RPF has actively promoted since taking power in 1994.
The 2003 Constitution says that either sex shall occupy not less than 30 per cent of all decision-making organs.
In the Senate, women now occupy 10 out of the current 25 members (representing 40 per cent), following the resignation of Penelope Kantarama in the recent past. She is yet to be replaced.
Overall, women now constitute 58 per cent of Rwanda’s bicameral parliament.
Worldwide, the average women representation in the Lower House stands at 21.3 per cent, 18.8 per cent in the Upper House (Senate) and 20.9 in both Houses, according to the Inter-Parliamentary Union figures released on July 1, 2013.
In sub-Saharan Africa, women representation in the Lower House averages 21.3 per cent, 18.1 per cent in the Upper House and 20.9 per cent in both Houses.
Under Rwanda’s proportional representation voting system (which is also applied in many world democracies), the number of House seats a party wins is proportionate to the number of votes won.
In Rwanda, each party or coalition draws a list of its candidates ahead of the polls who then win seats in ascending order according to how the party/coalition has fared in the polls.
But each party or independent candidate needs a minimum 5 per cent to win a seat.