A Homestay and Life on the Mekong River 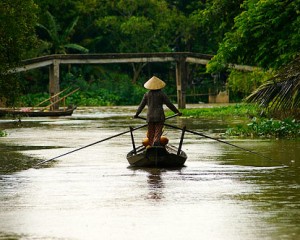 Last night was our first night at the homestay. We were not able to publish our blog in the river delta during the home stay, so here is our follow-up. The beds were firm, yet soft and were protected by very useful mosquito nets. The family who owns the house is very generous and has two adorable children; they give us a bountiful feast every meal; include today’s breakfast of eggs, bread, and traditional Vietnamese sides. After breakfast we got on to our boat and headed across the Mekong River to start our adventures.

The journey continued upon arriving at the bustling markets at the Mekong River Delta. We had the special opportunity to see and taste the making of traditional Vietnamese candy. Coconut, rice, ginger, and sugar appeared to be the magic ingredients of the candy making practice. After tasting the sugary delights, sipping tea, and buying treats, we walked into a rice paper making operation in which five women were working hard. The hot steam slowly creeping from their stations wafted into our faces and made the whole crew drip with sweat. Five minutes of the steamy room seemed like enough for us, yet for these women they were used to working 7 hours a day and making 3,000 rice papers. Nonetheless, they only made 100,000 dong a day which is roughly $5. Although this seems incredibly small to us, Hau told the group that the per-capita GDP was roughly $1,000-$3,000 a year.

We sure are lucky to have a tour guide like Hau because being affiliated to the party, he is granted special access to almost anywhere he likes. Therefore he has the ability to walk into a shop that may be of interest to us to show us around. This especially was useful when we visited the school…

After walking around the Mekong, our journey continued to the floating markets. At the market we had to fulfill a shopping list for dinner. We walked through the majestic market, full of interesting sights, smells, and sounds. We had to learn the ways of the Vietnamese people by haggling for our vegetables, yet we faced issues with communication. I’m sure we got ripped off multiple times considering since all we could do was hold out money and ask how much. Mr. Hau split the group into two teams to see who could complete the shopping list and spend the least money. Of course tem Toney won which included the champions Zach, Josh, Jenny, David, Katie, James, and Meagan. You can probably deduce who the losers were. After our market exercise we took some small row boats through the beautiful mangroves of the Mekong. We then got to refuel for lunch. Lunch was again fantastic, but even more special was that the restaurant had a 10 foot long pet python who did not have a name… so we named it Nadini. The brave had a chance to hold the snake and with a great effort we even got Josh to hold Nadini.

After the morning trekking trekking had been completed, we commenced on a bike ride through the woods and houses of the local village. Motor scooters whizzed past us, contributing to the hectic atmosphere. Under a beautiful sky and over streams we passed until David’s bike broke, but Mr. Hoa was there to save the day and mend the broken piece of metal. We were luckily not too far from our destination: a school with students our own age. Initial greetings were awkward with the language barrier, but everyone was friendly. We immediately started a game of volleyball and soccer afterwards. We shared laughs and learned each other’s names, but eventually had to leave with the promise of returning the next day. After a short ride back to the home stay we quickly refreshed. Members of the family played traditional music using a distortion guitar and Monowar. Songs were sung about young farmers experiencing love and women paddling along the river. We then joined the women in the house and all twenty plus of us fit in the kitchen! We cooked an omelet-like dish though it was made with flour and filed with shrimp. After dinner Mr. Hoa gave us more competitions for the teams to compete, though these were more game like. In one game two members of one team were tied together by the ankle and balloons were tied to the opposite ankle. Then the teammates fought against a pair of similarly constricted competitors, trying to pop one another’s balloons. We were then given free time to shower and to soak in the cool darkness of the night. 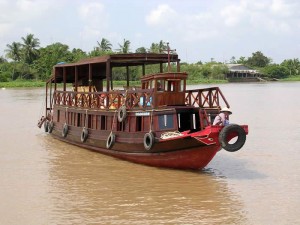 Like yesterday, we began our day by hopping on our ferry to cruise down the Mekong Delta. After a twenty minute boat ride, we arrived at our first stop: a Vietnamese produce and livestock market. In addition to cartloads of vegetables, fruits, and various roots, the market contained hundreds of live animals – fish, shrimp, squid and eels swam and flopped around in shallow pools of water; chickens, snakes, and frogs stumbled around on land; and dozens of other species were in various stages of dismemberment. While the three vegetarians of the group (Mr. Taylor, Ms. Stafford, and Megan Babla) were especially disturbed, we all felt a strong sense of shock when facing the stark realities of food production in a developing country. Before getting back on the boat, we bought a new soccer ball, a pair of goal nets, and two pairs of goalie gloves for the school we visited yesterday.

After the stop, we sailed back down the delta to a pottery kiln, where a team of potters spent their lives firing clay bricks inside a row of gigantic cinder-block kilns. The kilns were massive, nearly forty feet tall each and twenty times the size of the Parker pottery kiln. Next, we walked to a woodworking shop where coffins were produced. We learned that the custom is to purchase a coffin for any family member older than 60 and keep it for the person until they died…which could sometimes take decades. In the interim, the coffins were kept in the local woodworking shed and the giant room of soon-to-be-filled coffins creeped us out a little.

We sailed back to the homestay for a quick lunch (and a few card games) before getting on our bikes again to visit the school one last time. On the way, we stopped at a plant nursery to see some of the local flora and explore the Mekong’s natural beauty. When arriving at the school, we found it empty; apparently, in Vietnam, students don’t go to school on Thursday but do on Saturday. However, a few of the students (our friends from yesterday among them) returned to school on Thursdays to use the facilities, and we were able to put up the nets (which actually fit!), inflate the soccer ball, and start up six-on-six soccer and volleyball games with the students. The soccer game was incredibly competitive and enjoyable. Afterwards, we said goodbye to the students and biked home, sleeping early to prepare for a 5 am wake-up the next day.

Querer es Poder: The Will and the Way
Two teens bring a message of encouragement from a Mexican grandmother, whose education stopped after 6th grade, to Mayan girls…