Ho Chi Minh and Other Reflections from Francis Parker Students 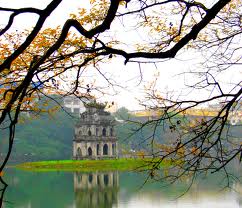 Our first full day in Hanoi was very active. We awoke to overcast skies, a slight mist, and a welcoming buffet. After eating we walked to the Hoan Kiem Lake at the center of Hanoi to visit Turtle Tower. Once there we learned about a 169 kg turtle living at the bottom of the lake. She is supposedly a last descendent of the Golden turtle god, possessor of a magic sword that helped the emperor defeat the Chinese and gain independence. After this we went to Ho Chi Minh’s Mausoleum. This granite vessel houses the body of Ho Chi Minh, creator of the Socialist Republic of Vietnam. His mausoleum is very similar to Lenin’s in Moscow. Everyone could feel Ho Chi Minh’s presence as we walked past his body, understanding that this man will forever be an integral part of Vietnamese history and a symbol of national pride. Ironically, it was Ho Chi Minh’s wish that he would be cremated. All of this extravagance comes in direct contrast with Ho Chi Minh’s wishes. Next, we visited Ho Chi Minh’s houses. Although Ho Chi Minh was offered the opportunity to live in the Presidential Palace, he refused. Instead, he requested that a house-on-stilts be built instead. This house is reminiscent of a typical home among the hill-people who lived in his village. Before lunch, we visited the one-pillar pagoda. This pagoda was built by Emperor Ly Thai Tong to give thanks to Bodhisattva, the god of mercy after he was given the son he always wanted. Due to the stringent laws regarding the number of children a family can have, this pagoda is still used. 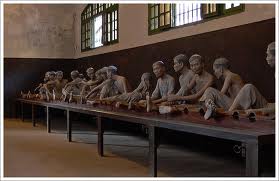 After lunch, we visited the Hoa Lo prison, commonly known by Americans as the “Hanoi Hilton.” This prison built in 1896 was first used by the French to subdue the Vietnamese patriots who were fighting against French control. For this reason it was another symbol of national pride. However,  from 1964 to 1973, the Vietnamese used this prison as a holding cell for American prisoners of war, thus garnering the name “Hanoi Hilton,” a sarcastic term that underlies a deep resentment for the POW’s treatment in Vietnamese hands. The Vietnamese government used propaganda to contrast the treatment of Vietnamese by the French and the treatment of the Americans by the Vietnamese in order to create an image of moral superiority. While the Vietnamese were shackled to tables under French rule, the Americans were given Christmas dinners and were allowed to play volleyball in the yard under Vietnamese rule. Just after visiting the Hao Lo Prison, we each got in rickshaws and were given a one-hour tour of the city. Although the sightseeing was fantastic, the idea of the rickshaw was appalling in that it was reminiscent of early colonial aristocracy, where the rich paid peasants to drive them around. Nevertheless, the ride was memorable and the busy afternoon was full of energy. The day concluded with a two-hour city exploration and tour bus karaoke, with performances by Steven, James, Max, and Tony.

Music Saved My Life
The transcendent power of music heals both individual – and national – trauma. Packed with rich historical and contemporary footage…