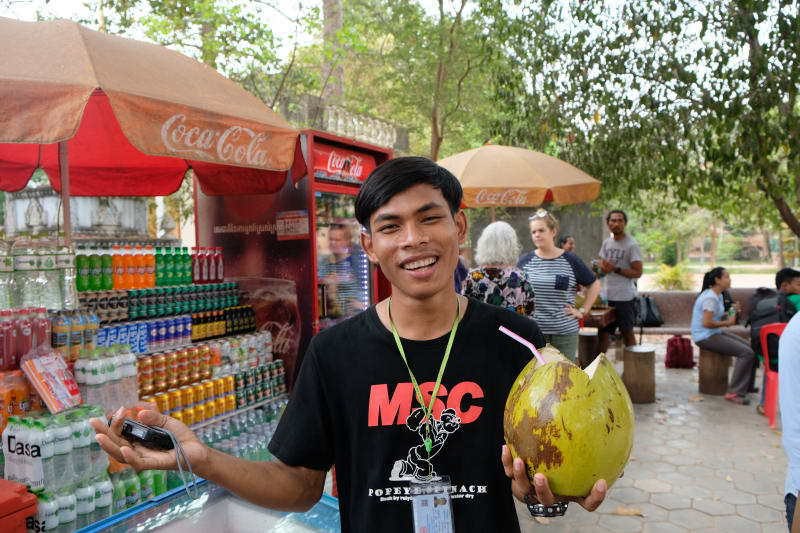 Day One – Finally! We have arrived!

We started off our day pretty early at 7:00 AM with a nice breakfast of cassava bread and instant ramen. We then had a fairly short introductory lesson in Khmer where we learned how to say hello, goodbye, how are you, I’m fine and thank you. After the Khmer lesson, we got into Tuktuks and drove to the PEPY Learning Center. After about a month of emailing, we finally met our pen-pals. We talked for a little while about whatever we could think of, how long our flight was, how their day had been or just something else completely random to become more familiar with our pen-pals. After a short Powerpoint about what PEPY’s mission statement was and all of the programs that they have created over the years. We then went to a nearby Buddhist temple where we were all given our first photography assignment. We were told to take portraits of each other all around the temple and the surrounding campus. We had to show different emotions and play around with angles and composition. We all went off and after we had all finished, we had a short break where we could talk to our pen-pals more and really start to get to know them. We then went back to PEPY where we created an anaphoric poem with the repeating line being “I remember”. Each student, both Cambodian and American, wrote one line about any memory that they had in their head that stuck out to them. Some wrote about learning how to ride bikes, their pets or their family. When we were all done writing our collective poem, we all said goodbye and went to go eat lunch at this restaurant called Vitking. It was delicious and the main dish was this boiling noodle, egg and mushroom soup that was so good.

After a delicious lunch, we headed back by way of a great tuktuk ride back to home base. We had some free time to shower and sit back before we went to see the founder of the Metta Karuna, Sister Denise. Sister Denice is the recipient of a Nobel Peace Prize (which we all got to see and gawk at) due to her hard work in the humanitarian landscape. She spoke on some of the different founding principles of the reflection center, including (but not limited to) human dignity and spirit, individuality and environmentalism. The Metta Karuna is something of a center of spirituality, with each faith and religion generously and genuinely welcomed. One such example of the philosophy is a chapel in which all faiths can pray and go along with necessary daily activities. Sister Denise spoke on the spreading of her anti-landmine and anti-cluster bomb movement, and how it gained traction. She also spoke on the need for peace, reconciliation and humanity in today’s world, and how it all starts from understanding. There was no shortage of wonder on our part once she presented her Nobel Prize (which we all got to hold!) and many are still reeling in the aftermath. Once the informative and gracious discussion was over, we had a discussion on the importance of responsible tourism and the necessity to have respect for the culture you are visiting. Much discussion was had concerning the need for understanding and following the culture guidelines. After this, we had some more free time until we headed out for dinner at Old House. Beef, morning glories and mountains of rice were graciously served (and subsequently devoured) by our group. All in all, the day ended with a very informative conclusion, and the group can’t wait for more!

Wings of Peace
What lessons from Hiroshima can bridge the gap between a devastating past and a hopeful future? In this multiple-award winning…